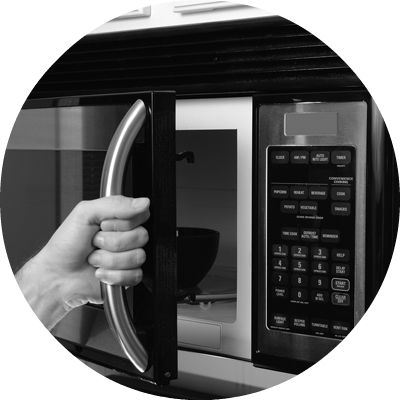 Microwaves are radio waves with frequencies ranging from around 300 million cycles per second (300 MHz) to 3 GHz. RF. A standard measure of exposure for microwave energy is the Specific Absorption Rate (SAR) or rate of tissue energy absorption measured in watts per kilogram of tissue.

Microwave leakage is serious enough that the FDA sets strict limits on it for the manufacturers. But once door seals age, leaking tends to exceed those limits, often at head level. That’s bad news, because the microwave energy inside a microwave oven is massive!

The facts about microwaves & cataracts

What do microwaves do to food?

In a microwave oven, alternating current forces atoms reverse polarity at a startlingly high rate. This creates such violent friction that the water inside the food molecules begin to vibrate and heat up.

The dangers of microwaved foods.

Microwaves break chemical and molecular bonds, and can literally rip atoms apart, disrupting the basic biochemical structures of life. It’s no wonder foods cooked in such a way become so harmful to consume.Government and industry studies suggest they pose no threat, but a growing body of knowledge now contradicts those claims.

The Swiss scientist Hans Hertel, was the first to study microwave dangers, specifically, how cooking degrades and depletes food of nutrients—an effect that shows up in study participants' blood samples.

Researcher’s conclusion: microwaving likely reduces and reverses the potential benefits of food, above and beyond the harm heating itself causes.

Another study of microwave problems reported in the medical journal, The Lancet, showed that when infant formula was microwaved for ten minutes, it altered the structure of its component amino acids, possibly resulting in functional, structural and immunological abnormalities.

--> Get protected now with this device!