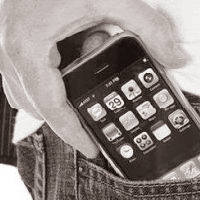 In 2012 the results of one of the largest population studies conducted in France with over 26,000 men using cell phones reported continuous decrease in semen concentration of about 1.9% per year with a total decrease of a third (32.2%) over the 17-year study period. Importantly, the study also recorded significant decreases in the percentage of morphologically normal sperm.

The study implications concluded: “As the men were selected without a prior knowledge regarding their semen quality characteristics, the results are expected to be close to the values in the general French population.

The very large sample size and the robustness of the results confer great statistical power and credibility to the results. To our knowledge, it is the first study concluding a severe and general decrease in sperm concentration and morphology at the scale of a whole country over a substantial period. This constitutes a serious public health warning. The link with the environment particularly needs to be determined.” Rolland M, Le Moal J, Wagner V, Royere D, De Mouzon J., J Hum Repod, 2013 Feb;28(2) 462-70.

Cleveland Clinic’s 2008 study of cell phone use and male fertility also concluded, “…results suggest that the use of cell phones by men is associated with a decrease in semen quality.The decrease in sperm count, motility, viability, and normal morphology is related to the duration of exposure to cell phones. The see effects may not depend on the initial semen quality of the subjects. More studies are needed to identify the mechanism involved in the reduction of semen quality.” Ashok Agarwal, Ph.D., H.C.L.D., Fnu Deepinder, M.D., Rakesh K. Sharma, Ph.D., Geetha Ranga, Ph.D., and JianboLi, Ph.D (2008) Effect of cell phone usage on semen analysis in men attending infertility clinic: an observational study. Fertility and Sterility J, 2008; 89: 124-8.

Laptop Radiation & Male Infertility — the use of laptops (especially when situated on the lap near the reproductive organs) has been connected to male infertility. (Journal of Human Reproduction). Theories why include the heat from the machine itself on the scrotum, or radiation from the EMF at such a close distance.