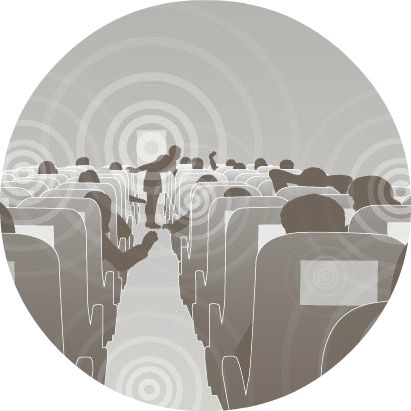 A Swiss and German television network collaborated to secretly swab the cabins of 31 airplanes from several popular airliners. The swabs were then sent off to the University of British Columbia for analysis. Twenty-eight of them tested positive for high levels of a jet oil ingredient called tricresyl phosphate (TCP).

TCP is used to prevent wear inside jet engines, but is also known to cause respiratory distress, drowsiness, headaches or other neurological problems in humans.

This cluster of symptoms is known as Aerotoxic Syndrome. Former British Airways pilot Tristan Loraine has conducted research into the condition for seven years, leading eventually to a documentary about his findings. Loraine claims that it was contaminated cabin air that made him unable to work after 19 years as a pilot.

According to clinical neuropsychologist Mackenzie Ross of University College London, up to 200,000 airline passengers may suffer from the condition each year. A 2008 investigation by the United Kingdom'sTelegraph newspaper uncovered hundreds of complaints of contaminated air filed by British pilots.

Scientists believe that TCP and other toxic chemicals are sucked into airplane cabins as the natural consequence of engine design. Modern engines use what is referred to as a "bleed air" system, in which air is removed from the engine's compressor, cooled, and funneled into the cabin after being filtered for viruses and bacteria. No filtration process takes place to remove potentially toxic particles or fumes, however.

According to aviation groups, pilots and scientists, the jet industry has known about the dangers of bleed air systems for decades and has simply failed to act. Recent evidence connecting contaminated air with concrete health problems has increased pressure on the industry, however, and change may be coming. In 2010, Boeing plans to introduce the first jet since the 1950s that uses a source other than the engine for cabin air.