Using a range of measurement scales we are able to scientifically analyze how the SafeSpace products interact with environments, objects and biological organisms.  Independent clinical and laboratory testing using DNA Testing, Heart Rate Variability and Bioresonance Testing have shown the effectiveness of the SafeSpace products on the human body as well as the environment.

To test our impact on the field itself, we also utilize qualitative testing. This type of testing method is often used by holistic health providers to detect changes on higher subtle energy planes—changes that current scientific instrumentation, with its focus on the impact of electromagnetic fields, cannot yet measure.

Documented research has shown that changes in DNA biochemistry that arise from interactions with EMFs can lead to serious illnesses. DNA deterioration and mutation, of course, has been connected to numerous cancers. EMFs from cell phones have been shown not only to impair DNA's ability to rewind, but to actually cause DNA to unwind further.

Quantum Biology Labs, an independent facility with an outstanding national reputation, tested the SafeSpace Smart Patch on actual human DNA. Prolonged use of an unprotected phone resulted in DNA deterioration. But when the SafeSpace Smart patch was attached to the phone, this harmful effect was completely neutralized. In fact, DNA rewinding was enhanced. In other words, the SafeSpace product had a beneficial biological effect on DNA. 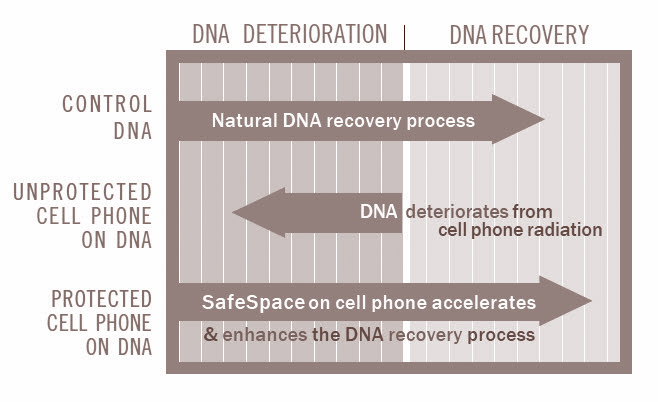 “Not only was the detrimental effect of electromagnetic (EM) energy completely neutralized when the SafeSpace  Smart Patch  was attached to the cell phone… the DNA rewinding process was enhanced.” Glen Rein, Ph.D., Quantum Biology Research Labs

Research has also shown that electromagnetic radiation from electrical circuitry and routers in homes and offices inhibits the electrical properties of DNA. The SafeSpace Home / Office Adapter has been shown to not only reverse DNA damage, but to improve the DNA. 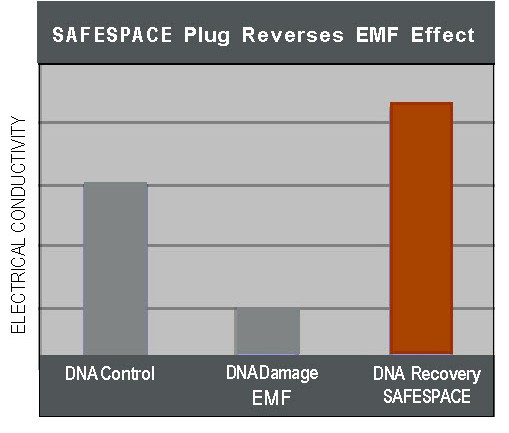 “The SafeSpace Home Office Adapter more than completely reversed the damaging effects from radiation in the electric circuit. Testing showed SafeSpace restored and enhanced the conductivity values of the DNA above the original control value.” Quantum Biology Research Labs

Heart Rate Variability (HRV) testing has shown the effectiveness of SafeSpace products in supporting the body’s ability to stay balanced against a variety of stress fields.

The health of the entire body can be determined by analyzing the length of time between each heartbeat. The difference in time between each heartbeat is referred to as heart rate variability (HRV). Like a fingerprint, each individual's heart rate variability is unique. This "fingerprint" reflects all of the fluctuating neurological, immunological and hormonal processes that occur in a human body.

A decrease in HRV is seen as reliable indicator for many common diseases, which is why so many doctors use HRV analysis to help detect disorders in their earliest stages.

HRV testing was used to test the energetic effect of the VitaPlex pendant on the body,

“Based on my personal experience from using the VitaPlex and the consistent test results I’ve seen, I feel the VitaPlex Pendant is the most effective, most adaptable and simplest tool one can use for the maintenance of health and well-being.” Dr. Michael Nokken MN

Testing the Smart Patch with HRV

ART is the only system of manual muscle testing to be advocated by some of the world's leading brain researchers and neurologists. Leading neurologists have coined ART as the only true biofeedback tool because no external devices are used on the body.

Kineseological testing of the SafeSpace products has repeatedly shown that the energy flow to the muscles strengthens dramatically. A balancing and strengthening effect on the glands and other systems of the body also occurs.

Kinesiology, which is the study of the body movement and muscle response, effectively indicates where blocks and imbalances are impairing physical, emotional or energetic wellbeing.

There are many factors in the environment which can interfere with the flow of vital force through our electrical bodies, consequently causing weakness on a muscle test. The testing of the relative energy available to muscles -- which is also associated with the energy flow through the body (meridians) -- allows the kineseologist to assess a subject's energy level and determine ways to promote healthy flow.  Kinesiological testing has shown that stress, emotional blockages and toxins can detrimentally affect the glands and organs, as well as other systems.

In most cases, the stress patterns were increased by cell phone usage. But use of the SafeSpace Smart Patch was shown to neutralize EMF disturbance created by the cell phones. In fact, the SafeSpace Patch had an overall balancing and strengthening effect on the body, and readings were typically healthier than the original test using no phone whatsoever.

To test our impact on the subtler energetic aspect of the body and the environment, we also utilize qualitative testing. This type of testing method is often used by holistic health providers to detect changes that current scientific instrumentation, with its focus on gross electromagnetic quantity, cannot yet measure.

At a certain level, all life is composed of energy; vibrations are constantly being generated, transmitted and received. All frequencies have their own relationship and harmonic signatures.  In qualitative testing, the interaction of these subtle fields can be measured.

Qualitative measurement allows us to analyze and understand the subtle energetic impacts of SafeSpace products on the environment and people. Tools designed to function as extensions of the human energy system are used for detection and measurement of specific qualities. Based on the principle of selective resonance, the tools help the researcher to focus on whatever aspect is being tested. This process also helps the researcher to observe a multidimensional effect.